It will be of service if I put on record, for future reference, one or two facts relative to the Keeill and the Chibbyr. According to Mr Kermode’s List of Antiquities, the Keeill, which is nameless, was destroyed by Kewish (tenant farmer), in the year 1898. This is corroborated by Mr Ralfe, to whom the late Mr Kewish, of Ballavell, in 1899, described the destruction of Chibbyr Unjin. The well, he said, had run dry, owing to the making of a drain which took away its water. He emptied loads of mould into it. He destroyed the sacred Ash-tree, which used to be decorated with rags, but now was rotten. He carted away the stones of the Chapel adjacent, which others had been afraid to meddle with: it was a “superstition.” Some used to drink the water; others to carry it away in bottles.

In the year 1873 the Chibbyr was in good order according to a coloured drawing ‘made in that year by Mr J. M. Jeffcott, High-Bailiff of Castletown. He had been secretary of the Archaological Commission appointed by Governor Loch in 1876, so that his sketch must be considered reliable. (see below)

When Kewish destroyed the foundations of the Keeill in 1898, he found in the walls a cross cut in a granite boulder. It measures 23ín. long and 18in. wide. Mr Kermode thinks it may be of the 6th century or perhaps a little later. The original is in Kirk Malew Churchyard, and a cast is in the Museum.

According to Mr A. W. Moore and other writers, Chibbyr Unjin was formerly much venerated.  This well, and the sacred tree which overshadowed it, were reverenced long before Christian times.

Chibbyr Unjin was supposed to be presided over by the divine Spirit of the Ash. The well was known all over the Island, and devotees came from all the parishes to practise certain rites.

Over and above tradition, there are many references to the well, both in manuscript and in print. An unpublished Diocesan Registry MS. in the library of the Manx Museum records that in the time of Charles I there was a Bishop of Sodor and Mann named Foster, who wished to do away with all Romish practices which remained from pre-Reformation times. In the year 1634 he put a number of questions to the Church Wardens of Kirk Malew, in which parish the well lies. One of the replies to the Bishop reads:

Alsoe we heere that many from other Pishes (parishes) doe repayre and resort unto a well, ¹yt (yet) is in our pish (parish), to what intent or purposte we know not.

Feltham, in 1798, writes: “A short distance to the east of Ballatrollage, about three miles from Castletown, is a famous well visited for medical aid.”

In the “Place-name” books of the Ordnance Survey, dated about 1868, there is a reference which is of great interest concerning this well:

Patients wishing to be cured must visit the well on Midsummer Day, bringing with them a rag, which they must slip in the water and walk round the well three times, taking a drink at the completion of each circuit, and finally depositing the rag on the thorn tree.

The reference to Midsummer would appear to indicate the heathen Festival of the worship of the Sun.  Mr. J. J. Kneen thinks that the mention of Midsummer would suggest that the Keeill may have been dedicated to St. John.

No access to the site without the landowner’s permission.  Working farm.

Proceedings article on the keeill and well site and the discovery of a pre-historic oak vessel.

If you have any information on this well please contact me and quote well record number (130) as this will help identify which well you are referring too. 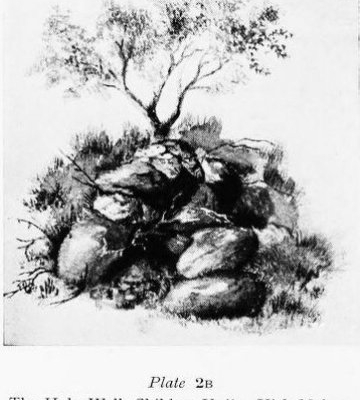 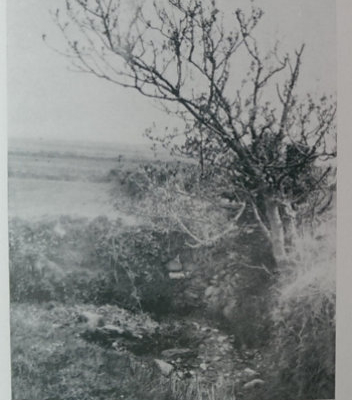 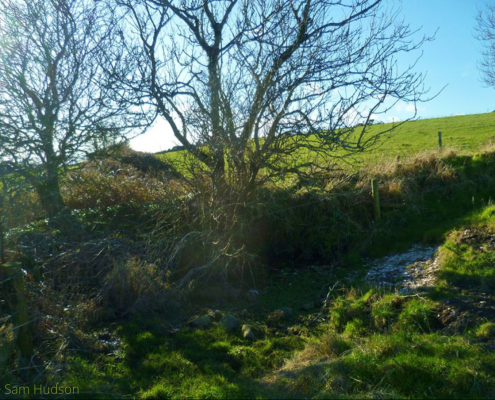