From reading some early 20th century newspaper articles, it appears the well had fallen into disuse and must have been in a poor state, so much so it is reported as being ‘discovered’ in 1902.  Today it is in much better shape and is regularly visited.

The newly discovered Monks’ Well (supposed to be the only pure water on the Island) has been thoroughly cleaned and opened by Mr W Quine, H.K.  The well and the curiously planted trees (in the shape of a cross) are well worth a visit.

A visitor from England with antiquarian tastes, informs us that he was walking up Silverburn Glen the other day when he heard some of the villagers talking of the ‘Monks’ Well.’  Upon enquiry he found that this well is up the glen some 300 yards past the Monks’ Bridge and about 3 yards from the public footpath.  This well is supposed to have been used by the monks from the Abbey hundreds of years ago for sacred and other purposes.  Its water is said to have mineral properties, which is likely enough, seeing that iron-stone abounds in the neighbourhood; and many people still living remember their friends using it for medicinal purposes.

Once there was a wall built around the well and almost encircling it, but it has been for a good while, in a dilapidated state and even thus it has been visited by a good many people.  Now, however, it is entirely destroyed (it has lately happened) by some person or persons.  Our visitor thinks it is a pity that any such interesting object as this should be obliterated and he thinks that the attention of the Antiquarian Society should be drawn into the matter.  And we agree with him.

In the Silverburn Glen at Ballasalla is a well said to have mineral properties which has been known for ages as the Monks’ Well.  Many are said in by-gone days to have used the water of the well for medicinal purposes and it is reported that formerly it was visited by strangers as an object of interest.  It has been in a dilapidated state for a good while but just lately, I hear that the stonework has been quite destroyed.

In bygone days Silverdale belonged to Rushen Abbey which was the Island’s principal monastery. Now, however, it is owned by Mr Quine, who has made it into an up-to-date and attractive spot for visitors. Shaded walks abound and in the beautiful natural glen there is an ancient wishing well. Now this well has a history; from 1134 to 1539 it was the Trinity Well of the Abbey, but when the Abbey ceased to be a monastery and was sold, it became a wishing well. Hardly anyone would dream of visiting this enchanting place without wishing at the well.

Exact location to be sought, however, an article above states, ‘300 yards past the Monks’ Bridge and about 3 yards from the public footpath.’  Having walked up the glen, I kept on the main footpath and eventually there was a break in the greenery.  When I walked through this, the well was directly in front of me.

If the glen is not closed, there is public access.

If you have any information on this well please contact me and quote well record number (207) as this will help identify which well you are referring too. 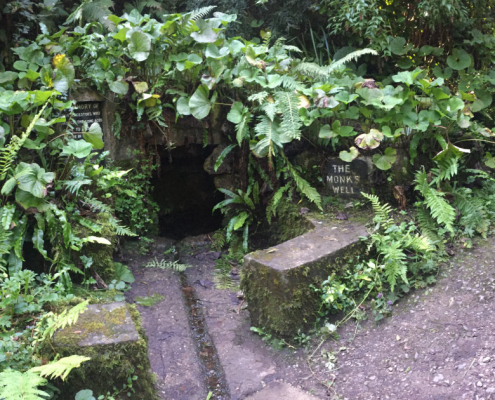 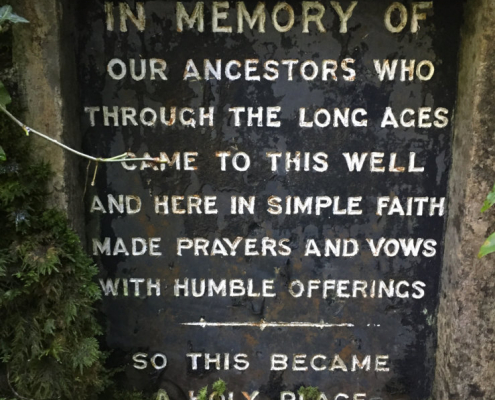 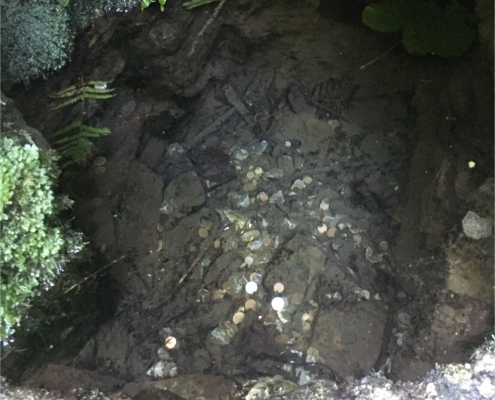 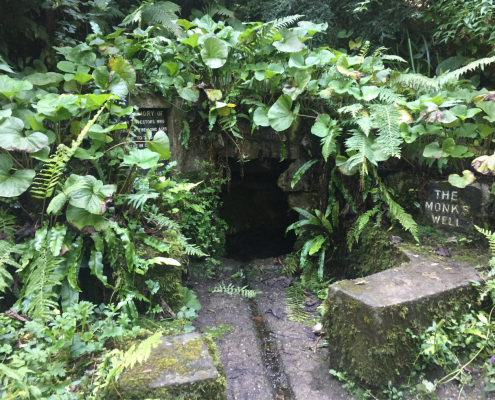