Following the successful installation of a Wishing Well by the Rotary Club of Perth in Australia, where the coins dropped into the well were collected and the funds distributed between local charities, in 1955 the Rotary Club of Douglas adopted the ‘Wishing Well’ idea as its effort to celebrate the Golden Jubilee of Rotary.  All clubs were asked throughout the world to initiate a memorial scheme and the Douglas Club decided to present a Wishing Well as a permanent attraction on the Promenade and a means of collecting money for deserving charities.

“The value of the Wishing Well to Manx Charities is primarily dependent on its siting and the obvious point is one where the visiting pedestrian traffic is heaviest.“¹   For this reason, Loch Promenade was chosen.

There was a competition for the best inscription on the Wishing Well with a winner’s prize of £5.  The winner was Mrs Catherine Woodriff of Parkville, 15 West View, Douglas with her rhyme:

One wish, one coin, as here I pause,
Cheers and helps a worthy cause.

With great interest, the Well was officially handed over at a ceremony on 27 May, 1957.

“A large crowd gathered in brilliant sunshine on Monday for the official opening of the Douglas Wishing Well on the Promenade.  Bouquets were presented, speeches were made and the Wishing Well was given a practical send-off when three little girls emptied baskets of shiny new coins into it.

The opening ceremony was performed by Mr WT Harvey, President of the Douglas Rotary Club, who sponsored the project and the well was then presented to the people of Douglas, the Mayor accepting the gift.

Guests were subsequently entertained to tea by the Mayor at Villa Marina.”²

In the local press, collections from the well in 1958 and 1959 were almost £270 and £251 respectively and distributed to some local charities.

The well is at the top end of Loch Promendade, Douglas just before the beginning of Harris Promenade.

There are various articles on the proposal and installation of the well at the imuseum.

If you have any information on this well please contact me and quote well record number (206) as this will help identify which well you are referring too. 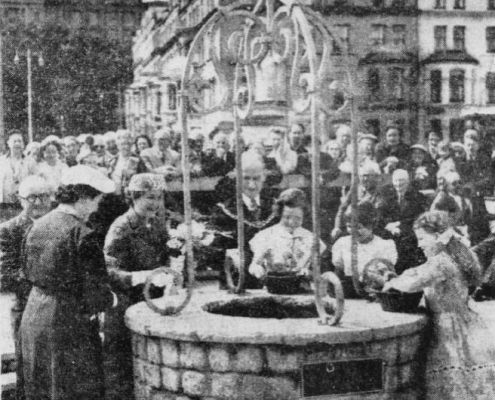 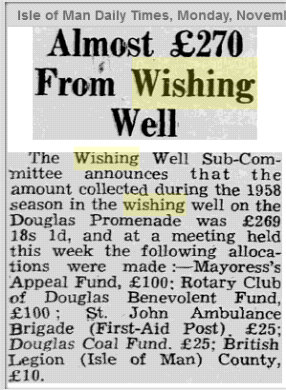 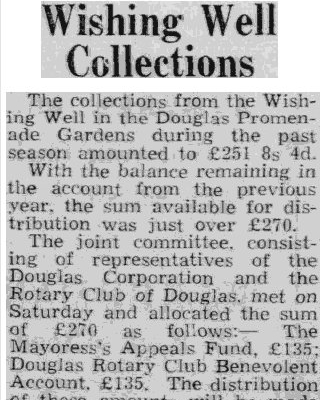